On August 29th volunteers from MELNA worked at the Casco Bay YMCA to expand an existing playground. Numerous companies donated materials and equipment to make the project very successful. The area was graded, leveled and a boulder retaining wall was installed. Several play areas made up of stone dust, wood chips and sand were created. Two planting beds with blueberry bushes were defined around the perimeter of the playground. An area for a rain barrel, mud kitchen and digging area was defined by granite blocks, flagstone and milled hemlock logs. Two hemlock benches we installed on the edges of the space and existing tires were scattered around the playground as play elements. At the end of the day, the staff at the Y was ecstatic with what was created. Thank you to all who contributed! 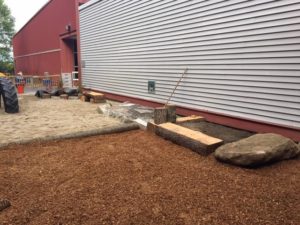 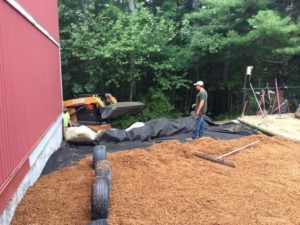 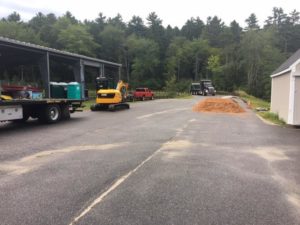 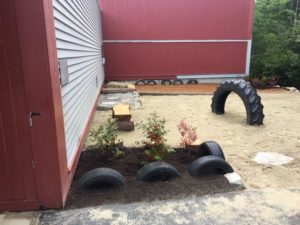 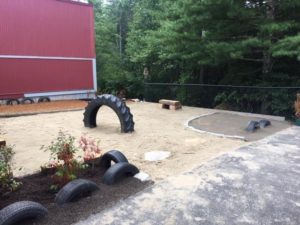 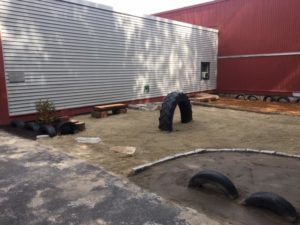 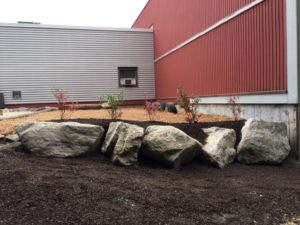 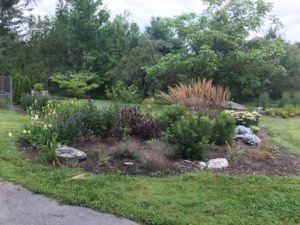 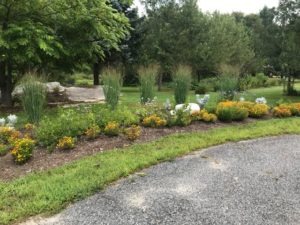 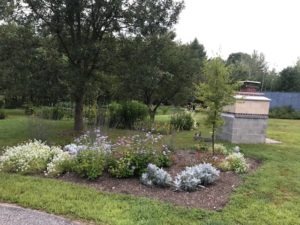 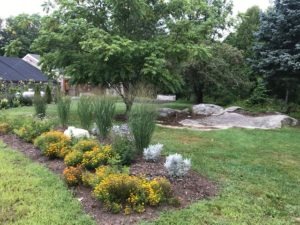 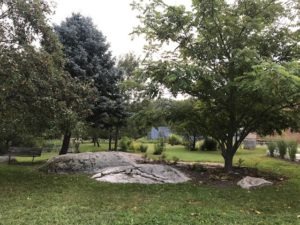 Read about Plant Something Maine in the Portland Press Herald!

MELNA to own and produce Maine Flower Show:

Read the article in the Portland Press Herald

Spring is taking its time getting here this year! We will all be very busy in a few short weeks. In the calm before the storm I wanted to take the opportunity to see if you are interested in carrying a supply of Maine Soil Testing Service Soil Sampling kits to keep at the checkout counter. The kits are free as always and consist of a Sample Information form (with sampling instructions on the back) and a flat sample container that is put together before filling. The customer pays when they mail in the sample(s). The basic test is just $15 and includes recommendations for lime, fertilizer, and other soil amendments. There is a choice of either conventional (chemical) fertilizers or non-chemical nutrient sources for the organic gardener.

We have several hundred loyal customers who come back to us year after year. There are also many folks who have never heard of us. This is an opportunity to better serve our mutual customer base in the Maine Gardening Community. If you would like to receive a supply of kits, just reply to this email with your mailing address and the number of kits you would like us to send.

Example reports can be found on our website: http://anlab.umesci.maine.edu. You can also order additional sample kits anytime on the same site.

Thanks for your consideration and Happy Spring!

The definitions of prohibited and regulated invasive species along with the full terms of the regulations can be found at www.dec.ny.gov/regulations/93848.html.

DO YOU SHIP PLANTS INTO OR THROUGH NEW YORK STATE?

State regulatory summaries concerning shipping requirements, quarantines, restricted and /or prohibited noxious weeds and invasive species along with state contact numbers can be found at http://nationalplantboard.org/laws-and-regulations/.

Here is a list of prohibited and regulated plants.

This is a self issued certificate, which us completed by the shipper.  Click here to access a sample certificate that meets the requirements, as we understand them, set forth by New York.

Earlier this week, both the House and Senate enacted LD 1746 which was a supplemental budget to close a roughly $80 million gap in the budget, as well as to fund certain legislation that had been passed by the legislature and sat on the Appropriations Table.  Part N of that legislation fully funded, effective January 1, 2014,  sales tax exemptions for machinery and equipment used in the production of greenhouse and nursery products, as well as the consumable items used in production such as seeds, fertilizers, pesticides, etc.  Governor LePage then signed the legislation thereby finally enacting it into law.

Because it has now been funded, “Horticulture” will now be in the State of Maine’s official definition of “Agriculture” — just as it is in all 49 other states and the federal government.

For well over 20 years our industry has been trying to get horticulture defined and treated just as all other parts of the agricultural industry.  It has often received unanimous or near unanimous legislative support; only to die on the Appropriations Table in every legislature.  They never placed our industry as a funding priority and ignored the growth in our industry that the tax exemption would create.  UNTIL NOW!

This year, in addition to seeking remedy through the Maine Legislature, we also approached the Governor’s Office in hopes the administration would fund this legislation in his budget.  MELNA presented financial comparisons before the Legislature and to the Governor that clearly showed how Maine nursery and greenhouse producers were well below the national average in sales; while neighboring NH with no sales tax was nearly 7 times greater than the national average in sales.  We gave detailed summaries that showed if Maine could shrink the 10% disadvantage producers and growers in Maine had compared to counterparts in NH, that Maine nursery and greenhouse producers will be more competitive, increase sales, hire more employees, and actually send more money to Maine’s General Fund than it is currently doing.  The lower production costs may well reduce some material costs for landscapers, as well.

The current administration was very receptive of our message and consistently included full funding in proposals to the legislature.  Our funding was cut in the legislature in previous legislation this session, but the administration and the leaders of the majority party viewed our needs as a priority and fully funded this tax exemption in the final supplemental budget that was enacted roughly along party lines right before adjournment.  It is estimated this legislation can create anywhere from 250-1500 new jobs and increase revenue to Maine’s General Fund between $2 – $7 million, annually.

Many thanks to all MELNA members who have labored so persistently over the last few decades and have taken time to contact legislators and even testify at the State House.  Thanks to the Maine Farm Bureau (of which MELNA is a member) and the Ornamental Horticulture Council (again, of which MELNA has representation). for carrying the fight to the State House.  And a very special thanks to Jon Olson, director of the Maine Farm Bureau and lobbyist at the Legislature for his hard work and diligence on behalf of the horticulture industry! 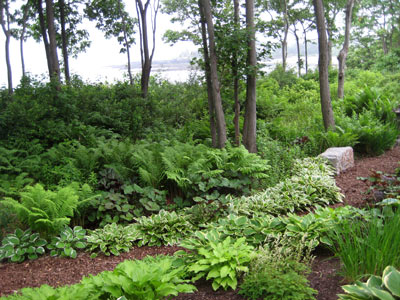